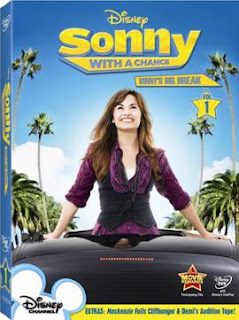 If you’re looking for a family-friendly tv show, you should check out “Sonny with a Chance: Sonny’s Big Break,” which was released by Walt Disney Studios Home Entertainment on DVD on August 25th, 2009. The DVD includes four episodes of the latest smash-hit Disney Channel Original Series.

In “Sonny with a Chance: Sonny’s Big Break,” you’ll follow Sonny (Camp Rock’s Demi Lovato), a talented Midwestern girl who relocates to Los Angeles to join the cast of the most popular sketch comedy show for teens and tweens, “So Random!” Sonny soon learns that life behind the scenes on a Hollywood set is not as idyllic as she imagined, especially because of her fellow performers: the self-absorbed Tawni (Tiffany Thornton), suave Nico (Brandon Mychal Smith), funny man Grady (Doug Brochu), quirky Zora (Allisyn Ashley Arm), and dreamy Chad Dylan Cooper (Sterling Knight), star of the teen drama “Mackenzie Falls,” which films in the adjacent studio, and his rivalry with the cast of “So Random!”

– “Sonny In The Middle” – World Premiere Episode on DVD, never before seen!