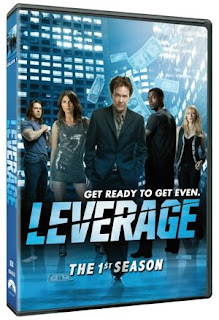 I had never heard of the television show called “Leverage: The First Season

” before, so was excited to review it on DVD. It was a good show – it kept me interested the entire time watching it. There were some parts that were a little cheesy, but overall, it was a good show! Paramount Home Entertainment releases “Leverage” on DVD on Tuesday, July 14th, 2009.

Academy Award Winner Timothy Hutton leads an elite team of thieves doing wrong for all the right reasons in the hit TNT series show “Leverage.” Timothy Hutton stars as Nate Ford, a former insurance investigator whose life hit the skids when his insurance company allowed his ailing 8-year-old son to die. Years later, Nate is getting even by leading a specialized team of thieves, computer experts, and con artists who right corporate and governmental injustices against honest citizens. The show also stars Gina Bellman, Christian Kane, Beth Riesgraf, and Aldis Hodge. Season 2 premieres on July 15th at 9/8c on TNT.

The LEVERAGE The First Season DVD includes all 13 episodes with audio commentary, along with deleted scenes and behind-the-scenes featurettes on the making of the show, the cameras, stunt fighting and the show’s renewal, plus Beth Riesgraf’s Crazy Actress Spoof. Arriving just in time for the premiere of season two on TNT, the four-disc set will be available for the suggested retail price of $39.99 U.S.

LEVERAGE The First Season is presented in widescreen with Dolby Digital English 5.1 Surround.

Every episode includes audio commentary and the DVD disc breakdown is as follows:

The Nigerian Job
The Homecoming Job
The Wedding Job

Leverage: Behind the Scenes
Anatomy of a Stunt Fight
The Cameras of Leverage
Leverage Gets Renewed
Beth Riesgraf’s Crazy Actress Spoof
Deleted Scenes