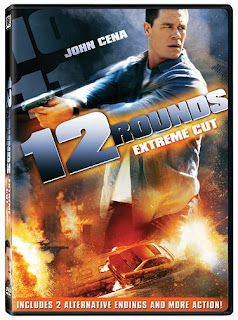 The other night, my husband and I sat back and enjoyed a movie together. We watched a movie called “12 Rounds.” Wow! Talk about an intense movie that kept you watching the entire time! This was such a movie.

On June 30th, Fox Home Entertainment released the intense and gripping “12 Rounds” on DVD and Blu-ray! In “12 Rounds,” a New Orleans Police Detective by the name of Danny Fisher (John Cena) stops a brilliant thief from getting away with a multi-million dollar heist. During the capture, the thief’s girlfriend is accidentally killed. A year later, the thief escapes from prison and this criminal mastermind carries out his revenge against Detective Fisher. He taunts Detective Fisher with a series of near-impossible puzzles and tasks – 12 rounds – that Fisher must complete (no matter how difficult). Detective Fisher has to get through the 12 rounds to save his fiancee from the twisted thief. It is an intense and suspenseful movie – one you’ll enjoy watching!