I love to watch movies! I watched an amazing movie this week called “Valkyrie.” Wow! It was intense! You know it’s a good movie if I’m able to stay awake until after midnight without falling asleep through it – lol. Fox Home Entertainment released Valkyrie on DVD and Blu-Ray on May 19th. This is definitely a movie you want to check out! 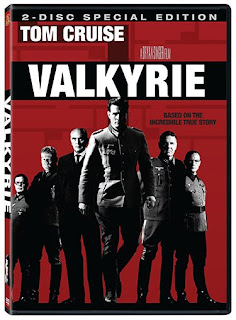 This is an awesome (and seldom told) true story of the German Resistance’s attempted coup and assassination of Adolf Hitler. The story takes place in Nazi Germany when the “July 20 plot” occurs to eliminate Adolf Hitler and end Hitler’s Germany. Colonel Claus von Stauffenberg (Tom Cruise) is the loyal German nationalist and mastermind behind the plot to kill Hitler and overthrow his fascist regime. Stauffenberg joins with a group of similarly minded officers to rid Germany of Hitler and his regime. What will happen to Stauffenberg and his men and the Germany they want to see? Watch and find out!