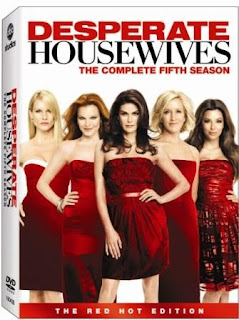 Yes, I’ll admit it, I LOVE watching the tv show “Desperate Housewives.” I had the opportunity to review “Desperate Housewives: The Complete Fifth Season” and loved it! It is hilarious to watch Bree, Lynette, Susan, Edie, and Gabrielle in this funny show about housewives, their friendships, families, and trials they face in life. There were a few episodes that left me in tears and others that left me inspired – wanting to be a better wife and mom. On September 1st, 2009, Walt Disney Studios Home Entertainment released “Desperate Housewives: The Complete Fifth Season” on DVD!!

“Desperate Housewives: The Complete Fifth Season” includes every Season Five episode of the long-running Emmy and Golden Globe winning series, as well as exclusive bonus features that will shock and delight viewers with new revelations.

WOMEN OF A CERTAIN AGE