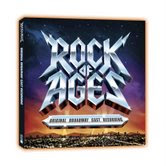 Thanks to One2One Network, I had the opportunity to review the “Rock of Ages” soundtrack! I really liked a lot of the songs, but it is not something I would listen to around my young ones. There were a couple of times I had to turn it off because a few swear words would jump out here and there. However, it is something I would listen to if driving in the car by myself or when the kids were asleep. Some of the songs took me back to the good old days when I was a kid!

Click HERE to watch the Making of the Soundtrack Video. You can purchase the soundtrack on Amazon as well!

Cool info: New Line Records just hammered the in-store release of the Original Broadway Cast Recording of five-time Tony Award nominated “ROCK OF AGES.” For those of you not in the know, Rock of Ages is the new Broadway musical starring American Idol finalist Constantine Maroulis