We love to watch movies in our family. I am always excited to find a movie that we can watch together with the kids. We had the opportunity to review “Race to Witch Mountain (Two-Disc Extended Edition + Digital Copy)

.” It was a fun, adventure-filled movie that my whole family enjoyed. I am definitely happy to own this movie! 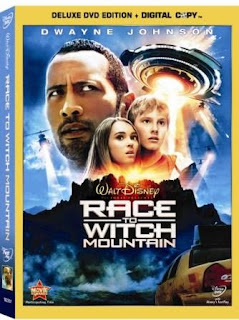 On August 4, 2009, Walt Disney Studios Home Entertainment released “Race to Witch Mountain” on DVD and Blu-Ray. Inspired by the original “Escape to Witch Mountain” (a Disney Classic), this new movie is filled with special effects, action, and family-friendly thrills. “Race to Witch Mountain” stars Dwayne Johnson (The Game Plan, Get Smart), AnnaSophia Robb (Bridge to Terabitha), Alexander Ludwig (The Seeker: The Dark is Rising), Carla Gugino (Night at the Museum), Tom Everett Scott (That Thing You Do), Ciaran Hinds (The Tale of Despereaux, Harry Potter and the Deathly Hallows: Part I), Chris Marquette (Just Friends), Billy Brown (Lakeview Terrace), Cheech Marin (Beverly Hills Chihuahua), and Garry Marshall (“The Simpsons”), with special appearances by Kim Richards and Ike Eisenmann, who played Tina and Tony, the siblings who hold the fate of the world in their hands in the classic Disney films.

In “Race to Witch Mountain,” a Las Vegas taxi driver Jack Bruno (Dwayne Johnson) gets pulled into an adventure of a lifetime when two mysterious teens ask him to drive them deep into the Nevada desert. Jack agrees to take them to the destination, especially when they prove to him they can pay him the money it would cost for the trip. They drive to Witch Mountain, a shadowy government outpost devoted to studying inexplicable phenomena – including UFO sightings. However, his teen passengers are far from ordinary teens. With an adversary on their trail, Sara and Seth display supernatural abilities and Jack becomes a reluctant hero as helps them evade their pursuer. Jack begins to realize that his passengers are actually here to help save the world!

Behind the Scenes – Bloopers

Both the Blu-ray™ Hi-Def and two-disc DVD editions of Race to Witch Mountain include these exciting bonus features:

• Deleted Scenes – With commentary by director Andy Fickman
• Bloopers – Dwayne Johnson and the cast crack up over on-set mistakes.
• Dylan & Cole Sprouse: Blu-ray™ Is Suite!
• Learn How To Take Your Favorite Movies On The Go

• BACKSTAGE DISNEY: Which Mountain? – Director Andy Fickman reveals the film’s hidden references to the original movies, Escape to Witch Mountain and Return from Witch Mountain.
• D-Box – Viewers equipped with a D-BOX™ Integrated Motion System will be able to experience a whole new dimension while watching this movie.