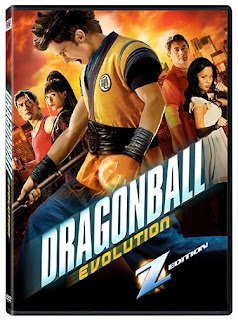 I recently had the opportunity to watch and review the movie “Dragonball: Evolution

.” I found the movie quite entertaining! However, I wouldn’t watch it around my younger kids, even though it’s PG, because the bad guys are a little scary looking. However, I didn’t have a problem with it myself. On July 28th, 2009, Fox Home Entertainment released “Dragonball: Evolution” on DVD and Blu-ray.

One of the most successful anime franchises comes to life on Blu-ray and DVD in “Dragonball: Evolution!” You’ll enjoy this non-stop action ride with a humanoid alien named Goku (Justin Chatwin, War of the Worlds), who tries to fulfill the wish of his dying grandfather by collecting all seven Dragonballs. He relies on the help of the great Master Roshi (Chow Yun-Fat, Bulletproof Monk). He only has a few days to collect all of the Dragonballs before the evil Lord Piccolo (James Marsters, “Buffy the Vampire Slayer”), who is trying to use the Dragonballs to take over the world.

From graphic novels, to a long-running television series and more than 25 video games that have sold over 10 million copies, Dragonball is a global franchise that remains hugely successful. Also starring Golden Globe® nominee* Emmy Rossum (The Phantom of the Opera), the Dragonball Evolution: Z Edition Blu-ray Disc and DVD contain eight deleted scenes, featurettes, gag reels, a music video and much more. The Blu-ray Disc will also include a digital copy of the film and an exclusive scavenger hunt game called “Goku’s Quest” and will be sold for the suggested retail price of $39.99 U.S. / $49.99 Canada, while the DVD will be sold for $27.98 U.S. / $43.48 Canada.

2 lucky readers on The Mommy-Files will win a copy of “Dragonball: Evolution” on DVD!!!

– Tell me in a comment why you want to win this movie!