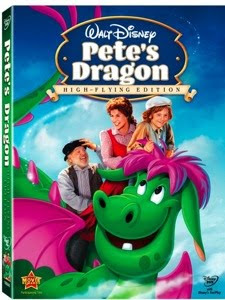 Growing up, I loved to watch the Disney Classic “Pete’s Dragon (High-Flying Edition)

!” I love the songs and storyline and my children love to watch it too! It’s so neat to be able to experience one of my favorite movies with my children and see the same joy they have while watching it. On August 18th, Walt Disney Studios Home Entertainment will release “Pete’s Dragon” on DVD. This is a must-see Disney movie that has made it’s way into the homes of families since it’s debut in 1977. You’ll enjoy the combination of animation and real-life characters as you enjoy “Pete’s Dragon.”

• Original Song Concept: “Boo Bop Bopbop Bop (I Love You, Too)” – The first
demo recording for one of the film’s unforgettable musical sequences with story
sketches for an early concept of the song Pete sings to Elliot.

• Original Demo Recordings (Audio Only) – A special audio-only feature that includes
early demo versions of “Brazzle Dazzle Day” and “Every Little Piece” before they
evolved into the songs heard in the movie. Also includes “The Greatest Star of All,” a
song originally intended to be sung by Ferdinand, a character later deleted from the
film.

• Promotional Record (Audio Only) – Pop versions of “It’s Not Easy,” “Brazzle Dazzle
Day,” “There’s Room For Everyone” and Academy Award nominee for Best Song,
“Candle On The Water,” originally released together on a 7” record to promote the
film’s music.

Pete’s Dragon is a fun musical adventure about Pete, a young orphan full of spunk who has a friend named Elliot, who just happens to be a tubby, 12-foot tall dragon who can make himself invisible. Pete (Sean Marshall) takes refuge from his abusive adoptive family in the seaside town of Passamaquoddy (sing with me now), Maine. Elliot’s invisible powers are neat, but end up getting Pete into trouble. Nora (Helen Reedy) notices the young boy’s plight and offers him a place to stay with her and her father Lampie (Mickey Rooney) in the Passamaquoddy Point Lighthouse. Lampie tends to drink a lot so when he tries to tell the townspeople about Elliot the invisible dragon, but they are nothing but amused. Dr. Terminus, the local quack, comes into town and discovers that Elliot is in fact real! Once he sees the dragon, he draws up a scheme to capture the dragon.

You’ll love “Pete’s Dragon!” Some of the songs were even nominated for Academy Awards, including “Candle on the Water,” “There’s Room for Everyone,” and “Brazzle Dazzle Day.”

Dragon In the Cave (Film)

2 lucky readers on The Mommy-Files will win a copy of “Pete’s Dragon” on DVD!!!

– Tell me in a comment why you want to win the DVD.