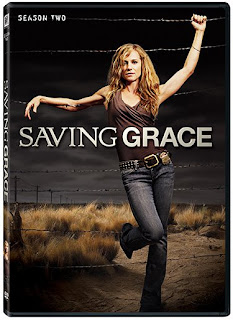 I had never really heard anything about the tv show “Saving Grace,” but was excited to have an opportunity to review it on DVD. I have to say that I actually really liked it. Each episode left me wanting to watch more. It was a good show and I would watch another season.

On June 16th, Twentieth Century Fox Home Entertainment released “Saving Grace: Season 2” on DVD. “Saving Grace” is about an intense, audacious, and fiery Oklahoma City police detective named Grace Hanadarko (Holly Hunter) – who is a fast-living, hard-drinking, cynical forty-something who, despite being at the top of her field, takes struggle to a new level. It all catches up with her when, after another night of too many drinks, she tragically kills a pedestrian with her car, forcing her, uncharacteristically, to ask God for help. God answers her prayers through Earl (a scruffy, tobacco-spitting, unlikely “last chance angel”) who helps Grace to get her life on the right path.

“Saving Grace” Season Two arrives on a four-disc set, featuring 14 episodes from Season Two with bonus features including featurettes: Have a Little Faith: The Successes of “Saving Grace” and The Wrap Party Red Carpet, Hosted by Dylan Minnette, and will be available for the suggested retail price of $49.98 U.S. / $59.98 Canada.

Disc Two Episodes
o Do You Love Him?
o Are You An Indian Princess?
o You Are My Partner
o The Heart Of A Cop

Disc Three Episodes
o Do You Believe In Second Chances?
o Take Me Somewhere, Earl
o The Live Ones
o But There’s Clay