THE SECRET LIFE OF THE AMERICAN TEENAGER: SEASON 2 DVD Review 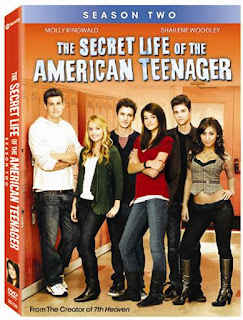 I had never heard of “The Secret Life of the American Teenager” until now. I was looking forward to watching it when I realized it was created by the same person who created “7th Heaven.” However, it was far different than I expected. I had a hard time watching a show where a 15 year old was pregnant and sneaking off to marry another 15 year old while using fake ids. I had a hard time with it being represented that sex “seemed” to be okay for the young high school students. I had higher expectations for the show myself.

About the Show: It’s a season full of bright new beginnings for The Secret Life of the American Teenager. An ABC Family series that has become a cultural phenomenon from coast to coast, The Secret Life of the American Teenager is more engaging than ever in its sensational second season. As Amy’s due date approaches, her secret marriage to Ben complicates matters even further. Viewers will be captivated by the relationship twists and turns, as they discover what the future holds for Amy, Ben, Ricky, and their friends and family. Created by Brenda Hampton (“7th Heaven”), The Secret Life of the American Teenager stars Molly Ringwald (Pretty in Pink), Shailene Woodley (“Crossing Jordan,” “The O.C.”“), Francia Raisa (Bring It On: All or Nothing ), Greg Finley (“Cold Case”), Josie Bissett (“Melrose Place”), and John Schneider (“Smallville”).

Bonus Features
· Character Secrets: The Cast Reveals All! – The cast of The Secret Life of the American Teenager discusses the intimate details of their characters and dishes on each other in exclusive on set interviews.
· Cast Close-Ups – A special set visit reveals the likes and dislikes of each cast member in a series of one-on-one video conversations.
· “Secret Life (You And Me)” – A music video by The Strange Familiar