I watched the “Nobel Son” on DVD the other day. I have to say it was an interesting movie with a twist at the end (not at all what I was expecting). It had some scenes that were quite difficult for me to watch and overall was an intense movie! 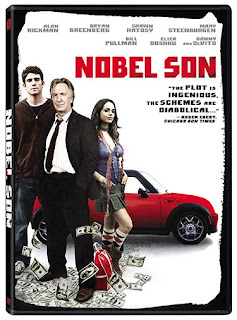 “Nobel Son” was released by Twentieth Century Fox Home Entertainment on June 9th, 2009 on DVD. It is a story involving family dysfunction, lust, betrayal, and revenge. Barkley Michaelson (in his 20s) is in a rut struggling to finish his Ph.D thesis. He constantly finds himself in the shadow of his highly accomplished father Eli Michaelson. The relationship becomes even more complicated when Barkley is kidnapped on the eve of Eli’s winning the Nobel Prize in chemistry. A ransom of 2 million dollars is demanded (the same amount won as a recipient of the prize). His father refuses to pay it and it starts a game of intrigue and deception. Casting includes Alan Rickman, Bryan Greenberg, Mary Steenburgen, Shawn Hatosy, Bill Pullman, Ted Danson, Danny Devito and Eliza Dushku.