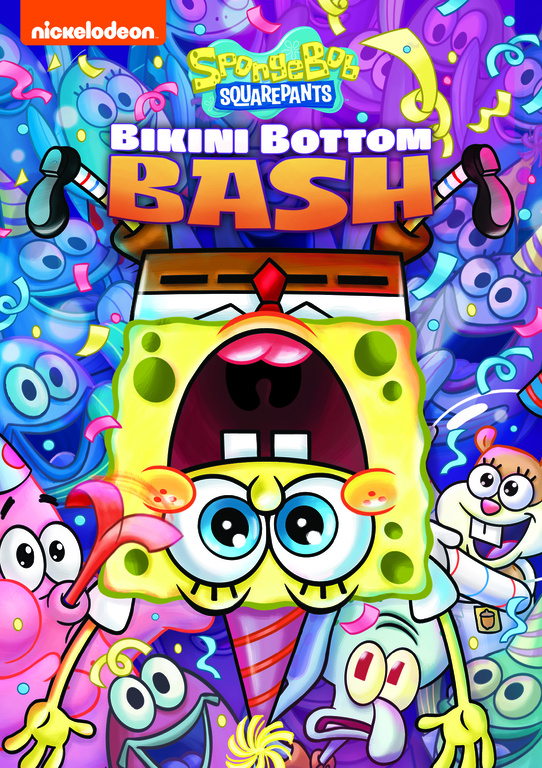 This rockin’ compilation boasts five uproarious party-themed episodes, including SpongeBob’s Big Birthday Blowout, which ranked as the #1 show for the year across kid networks among K2-11, K6-11, K9-14 and K12-17.  It’s SpongeBob’s birthday, but it’s a surprise, so SpongeBob and Patrick are going on a tour of the surface world while everyone else plans the birthday blowout below. Then, Bikini Bottom throws a wave of other parties: Catch some rays with SpongeBob and Patrick to get into the biggest bash in town, enjoy a girls’ night in at Pearl’s sleepover, raise the pineapple’s roof at SpongeBob’s house party, and celebrate the Krusty Krab’s momentous eleventy-seventh anniversary!

SpongeBob SquarePants: Bikini Bottom Bash is available for the suggested retail price of $10.99.

Nickelodeon, now in its 40th year, is the number-one entertainment brand for kids. It has built a diverse, global business by putting kids first in everything it does. The brand includes television programming and production in the United States and around the world, plus consumer products, digital, location-based experiences, publishing and feature films. For more information or artwork, visit http://www.nickpress.com. Nickelodeon and all related titles, characters and logos are trademarks of ViacomCBS Inc. (Nasdaq: VIACA, VIAC).

Who is your favorite character in SpongeBob SquarePants?