Dark Waters on Blu-ray and DVD 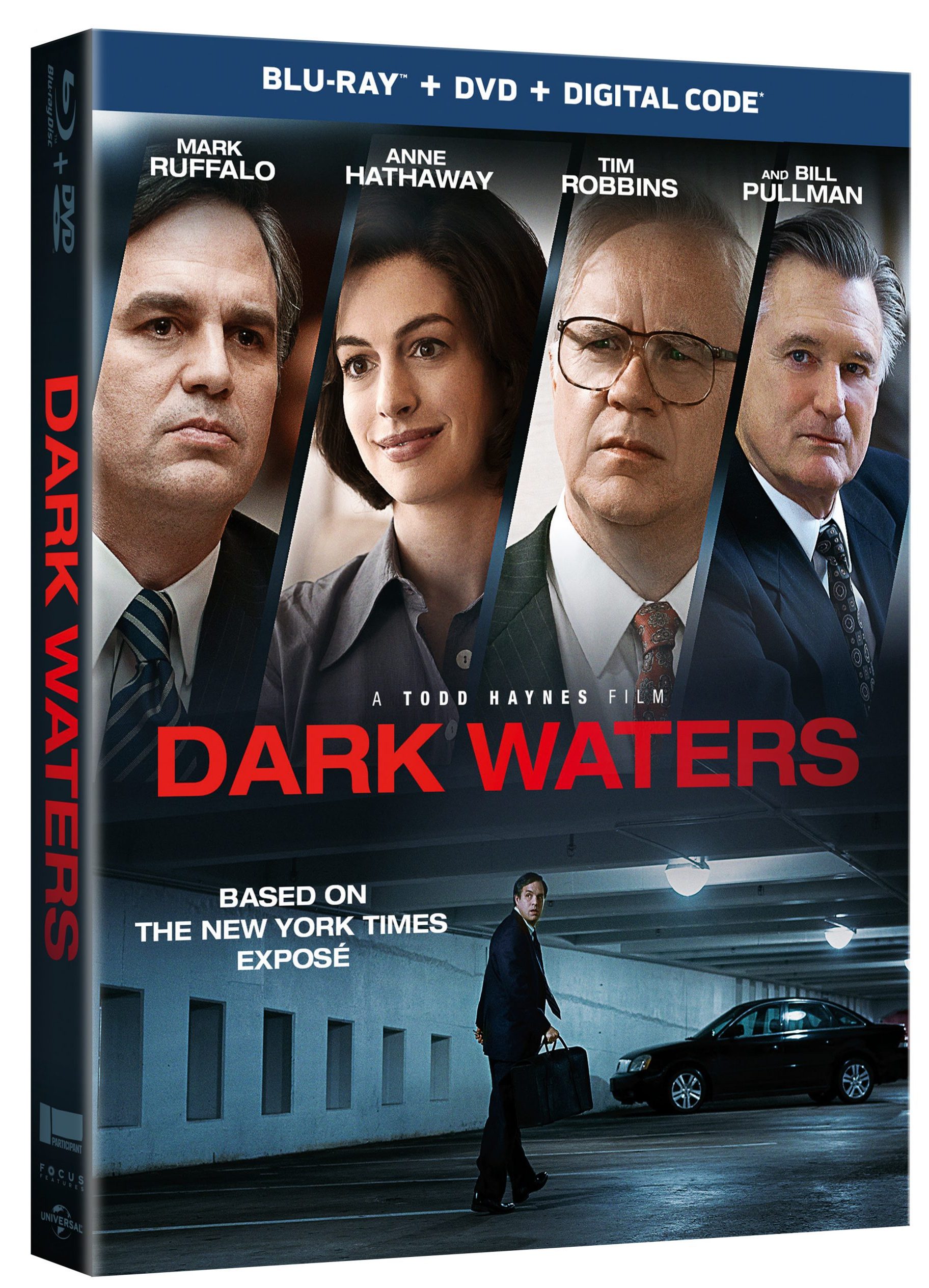 Watching movies is something I really enjoy doing with my husband and family. Ever since I saw Mark Ruffalo in JUST LIKE HEAVEN, I’ve loved him as an actor. When I saw him in DARK WATERS, I knew I had to see it! And boy was on the right track. He was great in this movie, as were Tim Robbins, Bill Pullman and Anne Hathaway! It was an emotionally moving movie and one I would definitely recommend you checking out!

This riveting story of a courageous attorney who uncovers a deadly secret and blows the lid off a monumental cover up, DARK WATERS is available on Digital as well as Blu-ray™, DVD and On Demand from Participant and Universal Pictures Home Entertainment. Directed by Academy Award® nominee Todd Haynes (Far From Heaven, Carol), this taut drama goes behind the scenes of one of the most shocking scandals in recent history as a former corporate lawyer takes on a seemingly unbeatable opponent in a fight for social justice that affects us all. Filled with emotional and suspenseful moments from beginning to end, audiences can now see captivating DARK WATERS bonus content here first when the film arrives on Blu-ray™, DVD and Digital. The never-before-seen insightful featurettes take viewers deeper into the story of an incredible real-life hero and unearths the staggering scale of corruption and greed.

The Rotten Tomatoes Certified Fresh® DARK WATERS is one of the most important films of the year and stars Academy Award® Nominee Mark Ruffalo (Avengers: End Game, Spotlight), as the tenacious attorney who uncovers a dark secret that connects a growing number of unexplained deaths to one of the world’s largest corporations. In the process, he risks everything – his future, his family, and his own life – to expose the truth. Ruffalo is accompanied by outstanding performances from the critically acclaimed supporting cast including Anne Hathaway (Interstellar, Les Misérables), Tim Robbins (War of the Worlds, The Shawshank Redemption) Bill Pullman (The Equalizer 2, TV’s “The Sinner”) and Bill Camp (12 Years a Slave, Joker) in this gripping thriller. With a script by Mario Correa and Matthew Michael Carnahan (World War Z), based on the New York Times Magazine article “The Lawyer Who Became DuPont’s Worst Nightmare” by Nathaniel Rich, and produced by Ruffalo, Pamela Koffler (One Hour Photo) and Christine Vachon (Carol), with executive producers Jeff Skoll (The Help, Lincoln), Jonathan King (Lincoln), Robert Kessel (Wonder) and Michael Sledd (I, Tonya, The Founder, Dallas Buyers Club), DARK WATERS is a powerful drama-thriller that everyone needs to see.

The Cost Of Being A Hero – This piece examines real-life Rob Bilott’s sacrifices to take down a powerful corporation and how a single individual can impact an entire community. Cast and filmmakers discuss the importance of telling this story and empowering whistle-blowers.

Uncovering DARK WATERS – Get an inside look into the storytelling behind the gritty, real-life story of DARK WATERS from Mark Ruffalo, Anne Hathaway, filmmakers, and crew.

The Real People – Meet the real people from Parkersburg who were impacted first-hand by the contaminated water as they share their experiences being on set and taking part in the film.

DARK WATERS is now available on Blu-ray™️, DVD and Digital.

Blu-ray™️ unleashes the power of your HDTV and is the best way to watch movies at home, featuring 6X the picture resolution of DVD, exclusive extras and theater-quality surround sound.

MOVIES ANYWHERE is the digital app that simplifies and enhances the digital movie collection and viewing experience by allowing consumers to access their favorite digital movies in one place when purchased or redeemed through participating digital retailers. Consumers can also redeem digital copy codes found in eligible Blu-ray™️ and DVD disc packages from participating studios and stream or download them through Movies Anywhere. MOVIES ANYWHERE is only available in the United States. For more information, visit https://moviesanywhere.com.

Have you seen DARK WATERS yet?