Do you have kids in your family who enjoy watching PAW PATROL? If so, you’ll want to check out PAW PATROL: The Great Pirate Rescue! – available on DVD on September 5th! It’s all paws on deck in Nickelodeon’s brand-new DVD collection – PAW Patrol: The Great Pirate Rescue! – available September 5. In this six-episode, swash-buckling adventure, the PAW Patrol take to the high seas for some epic rescues. Fans can join Ryder, Chase and the rest of the gang as they discover a secret pirate cave, embark on a treasure hunt, rescue whales and more. Produced by Nickelodeon Home Entertainment and distributed by Paramount Home Media Distribution, PAW Patrol: The Great Pirate Rescue! will be available on DVD September 5, for the suggested retail price of $14.99. 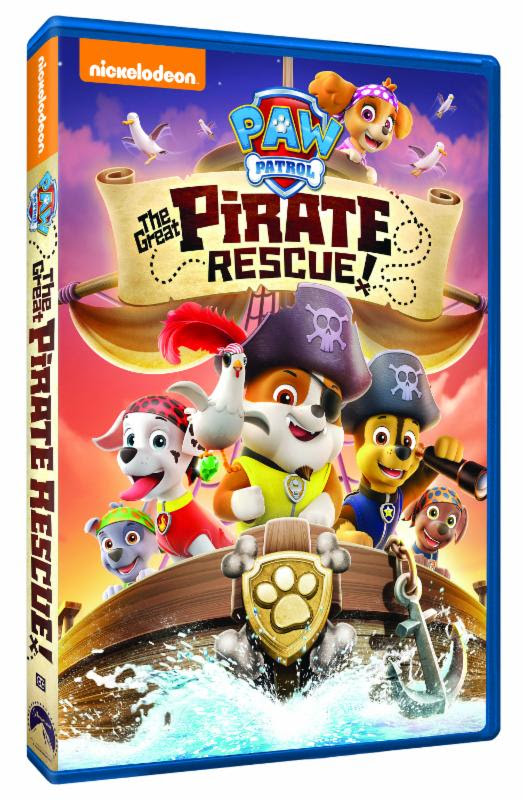 Pups and the Pirate Treasure – The PAW Patrol must rescue Cap’n Turbot after he accidentally stumbles into a secret cave that was once a pirate’s hideout. While there, they find an incomplete treasure map and embark on an adventure to find the missing pieces.

Pups and the Ghost Pirate – It’s Halloween and Cap’n Turbot is having a party on an old pirate ship! When the ship mysteriously starts to head out to sea captained by a “ghost,” the PAW Patrol must work together to save the ship and discover who the ghost is.

Pups Save the Bay – When there’s an oil spill in Adventure Bay, Ryder and the pups must rescue a baby whale and clean up the spill before any other animals swim through it.

Pups Save a Goodway – When Adventure Bay’s famous statue of Grandpa Grover Goodway ends up at the bottom of the Bay, Ryder and the pups have to help Cap’n Turbot raise it to the surface and get it to Town Square before Mayor Goodway’s family reunion.

Pups Save a Pool Day – On a hot day, the pups head to the water park where they discover that the pool is empty! It’s all paws on deck as they work to fix the broken water tower and get their pool day back on track.

Circus Pup-Formers – When the circus animals don’t make it in time for the show to start, Ryder and the pups step in and perform for Adventure Bay.

Nickelodeon, now in its 38th year, is the number-one entertainment brand for kids. It has built a diverse, global business by putting kids first in everything it does. The company includes television programming and production in the United States and around the world, plus consumer products, digital, recreation, books and feature films. Nickelodeon’s U.S. television network is seen in more than 90 million households and has been the number-one-rated kids’ basic cable network for 22 consecutive years. For more information or artwork, visit http://www.nickpress.com. Nickelodeon and all related titles, characters and logos are trademarks of Viacom Inc. (NASDAQ: VIA, VIAB).

1 lucky winner on Redhead Mom will receive a copy of PAW PATROL: The Great Pirate Rescue on DVD!!