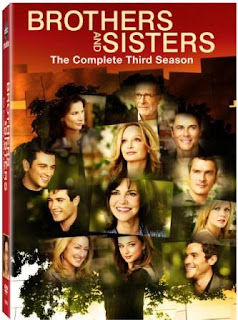 Like I’ve said before, we don’t have cable in our home. We mainly watch DVDs or TV online. I had not heard anything about “Brothers and Sisters” before and thought it sounded like a good show since it stars Sally Field and had a wholesome sounding title – “Brothers and Sisters.” Unfortunately, I had no idea of what was to come. One of the brothers was gay, which doesn’t bother me as much as the fact that he made out with his husband on screen – more than once. There was so much of it that I couldn’t finish watching the program and wouldn’t watch it again. However, I do know that there are people out there who do enjoy the show, so here is the information on the new release.

“Brothers and Sisters: The Complete Third Season” was released on DVD by Walt Disney Studios Home Entertainment on September 1st, 2009. The six-disc set includes every episode from the third season, plus exclusive cast interviews, deleted scenes, and much, much more.

Bonus Features
• Bloopers
• Deleted Scenes
• The Mothers of Brothers & Sisters — The cast of Brothers & Sisters discuss the amazing
role mothers play in their lives.
• The Ojai Experience — This intriguing featurette takes viewers on a tour of a real-life family
winery in Ojai, California with members of the Brothers & Sisters cast and offers a taste of
the truth and the fiction behind running a family wine business.
• In-Between Scenes — A behind-the-scenes look at the on-set high jinks that kept the
Brothers & Sisters ensemble on their toes—and laughing—during the shooting of Season
Three.

The Walkers are everything anyone could ask from a family—and a few things no one would want. The Complete Third Season of this compelling one-hour drama continues to follow the sprawling California-based clan as they face the complications of contemporary American life. Passionately devoted mother Nora Walker (Sally Field), her grown children and their loved ones contend with romance, parenting, divorce, infidelity, addiction, war and even death.