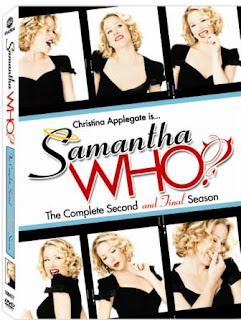 I had the opportunity to review “Samantha Who? Season 2” on DVD. I had never watched the show before, but found myself entertained and laughing through the season. I liked Christina Applegate in her role in this show and would definitely have watched future episodes of the show if this wasn’t it’s final season! “Samantha Who? Season 2” was released on DVD on August 25, 2009 by Walt Disney Studios Home Entertainment.

What is “Samantha Who?” about? The show is about a young woman named Samantha Newly (Christina Applegate) who gets a second chance at life when amnesia wipes her memory clean. She awakens from an eight-day coma with no memory of her previous life. Irritated by the discovery that she was a shallow, vain, nonstop partier, Samantha turns her life around and vows to be better. In Season Two, Samantha acquires a new beau (James Tupper of “Men in Trees”) and a new job (working with her formerly estranged mom, played by Jean Smart). You’ll enjoy this four-disc set, which has every episode from the final season plus a tour of the set with the show’s star, deleted scenes, a conversation with the series’ acclaimed actresses and more entertaining features that go behind the scenes of this lighthearted comedy.