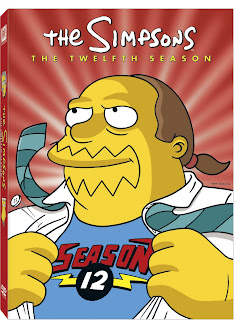 I just received “The Simpsons: The Complete Twelfth Season” on DVD and was excited to review it! Twentieth Century Fox Home Entertainment released this new season on DVD on August 18th! It’s hilarious watching Marge, Homer, Bart, Lisa, and Maggie in their twelfth season. I enjoyed watching it, but would not watch it with our 5 year old, 3 year old, or 1 year old. It is funny for the adults though! You won’t want to miss the Emmy Award Winning Comedy which is available in Collectible Packaging Featuring Springfield’s Favorite Critic – Comic Book Guy.

You’ll also enjoy the tons of special features available in “The Simpsons: The Complete Twelfth Season” including an introduction from Matt Groening; audio commentaries on every episode with Groening and “The Simpsons” Executive Producers, Writers, Actors, and Directors; deleted scenes; animation showcases; original sketches; special language feature; featurettes and more. As an added bonus, the set comes in collectible packaging modeled after the overweight and over opinionated retailer Comic Book Guy!

“The Simpsons” The Complete Twelfth Season Special Features:
All episodes are compiled on four discs (full frame, aspect ratio 1.33:1). Each episode is presented with English 5.1 Dolby Surround, Spanish and French Stereo and English, French and Spanish subtitles. The following is a breakdown of each disc: