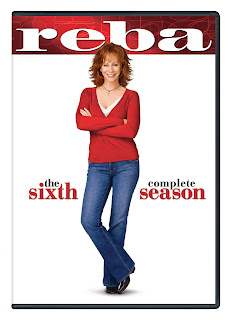 I had never watched the show called “REBA” before, but had the opportunity to watch “REBA: The Complete Sixth Season.” I liked it and enjoyed watching it. It was a cute, feel good show! I would love to watch the other seasons on DVD!
“REBA: The Complete Sixth Season is a Golden Globe® And Emmy®-Nominated Family Comedy starring Reba McEntire. It came out on DVD on June 23rd from Twentieth Century Fox Home Entertainment. “REBA” is a funny television show about a wisecracking suburban single mother trying to hold the Hart family together. She juggles her career, family, and relationships while wearing multiple hats and proving that she really is a survivor in hilarious final season! Reba McEntire was nominated for a Golden Globe® for Best Performance by an Actress in a Television Series – Musical or Comedy and two Emmys® for Outstanding Cinematography for a Multi-Camera Series, “Reba” was the top rated sitcom on its networks and garnered around 4.5 million viewers for the final episode.
In this final season, Reba has a full house and high blood pressure when son-in-law Van Montgomery (Steve Howey, Supercross) starts working out of her garage, middle child Kyra (Scarlett Pomers, “Star Trek: Voyager”) moves back home and oldest daughter Cheyenne (Joanna Garcia, “Privileged”) is pregnant with her second child. Things turn around when Van takes a job with a big Real Estate firm, Reba finds Van and Cheyenne their perfect house and Kyra moves out, wanting to tour with her band. As hectic as her life can be, Reba realizes that she is lucky to be caught in the middle of the craziest, most wonderful family possible. Featuring all 13 episodes from the series’ final season, “Reba” The Complete Sixth Season DVD collection is available for the suggested retail price of $24.98.
3 lucky readers on The Mommy-Files are going to win a copy of “REBA: The Complete Sixth Season” on DVD.
WIN IT!
– Tell me in a comment if you’ve ever seen “REBA” and who your favorite character in the show is!
EXTRA ENTRIES!
– Follow my blog (or tell me you already follow) – 1 entry
– Subscribe to my blog (or tell me you already subscribe) – 1 entry
– Follow me on Twitter (themommyfiles) and tweet about the contest – 1 entry (per day)
– Add the new Mommy-Files button – 1 entry
– Blog about the giveaway – 3 entries (per day)
– Favorite me on Technorati – 1 entry
– Tell me why you want to win this giveaway – 1 entry
RULES
– Giveaway ends at 11:59 p.m. PST on Tuesday, JULY 14th, 2009 and the winner will be announced on this blog on Wednesday, July 15th (as well as emailed).**IF YOU SUBMIT A COMMENT AFTER 11:59 PM ON TUESDAY, JULY 14TH, IT WILL BE DELETED**
– Please leave your email address in your comment so I can contact you if you win the giveaway.
– Winners must respond within 48 hours of email notification or another winner will be chosen.
– Open to US Residents!