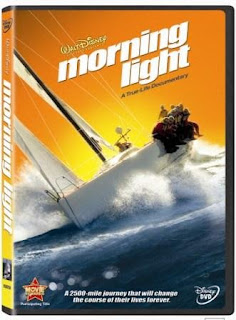 My husband LOVES sailing so I was super excited to watch the Disney DVD “Morning Light” with him. Walt Disney Pictures release “Morning Light” on DVD and Blu-ray on June 16th. It’s a great movie about the “true-to-life, unscripted account [of] how a crew of young adults set sail to compete in the oldest and most prestigious open sea race in the world, the Transpacific Yacht Race from Los Angeles to Honolulu, Hawaii.” It was neat to see the “real life” emotions and reactions during different parts of the movie!

The Transpacific Yacht Race (also called the Indianapolis 500) involves blue water ocean racing and is a competition that covers nearly 2,500 miles of ocean between Los Angeles and Honolulu. It was first held in 1906 and attracts elite competitors from all over the world in this race that can last over a week!

Both Disney and Demeuse (both are passionate sailors) first participated in the Transpac over 30 years ago. Disney held the mono hull record for the race from 1997 to 2005. In 2007, the two producers thought of a new project – to assemble and film a group of young sailors to crew the Morning Light – a 52-foot racing sloop – in the Transpac. They are considered to among the youngest crews to ever sail the Transpac. In “Morning Light,” writer-director Mark Monroe and editor and co-producer Paul Crowder document the selection of the team, preparation, emotional journey, and adventures on the sea.

Both the Blu-ray Hi-Def and DVD Editions of Morning Light include these exciting bonus features: