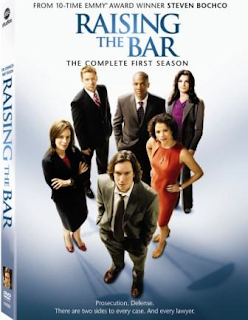 I recently had the opportunity to review the hot new legal drama called “Raising the Bar: The Complete First Season.” I wasn’t sure what to expect from this show, but I actually enjoyed watching it! It had me curious as to how each of the episodes would turn out. The actors did a great job as well!
“Raising the Bar: The Complete First Season” was released on June 2nd, 2009 by Walt Disney Studios Home Entertainment. The First Season DVD includes Exclusive Bonus Features and was produced by Emmy Winning Produer Steven Bochco.

“Raising the Bar” is about a group of young defense attorneys and prosecutors who learn that it’s easier to balance the scales of justice than it is to balance their personal and private lives. The talented cast includes Mark-Paul Gosselaar (“NYPD Blue”), Jane Kaczmarek (“Malcolm in the Middle”), Gloria Reuben (“ER”), Currie Graham (“Desperate Housewives”), Melissa Sagemill (“Sleeper Cell”), Teddy Sears (“Ugly Betty”), Natalia Cigliuti (“All My Children”), and J. August Richards (“Conviction”).

Passionate and idealistic public defender Jerry Kellerman (Mark Paul Gosselaar) learns to navigate the halls of justice and the personal politics of the courthouse as he struggles to get a fair hearing for his clients. Jerry and his associates Rosalind Whitman (Gloria Reuben), Richard Patrick Woolsley (Teddy Sears), and Bobbi Gilardi (Natalia Cigliuti) square off against Michelle Ernhardt (Melissa Sagemiller), a prosecutor trying to balance the desire to get real justice with assistant DA Nick Balco’s (Currie Graham) need to win cases. As they play out their professional rivalry in front of imperious and ambitious Judge Trudy Kessler (Jane Kaczmarek), issues of life, love, and the law are seen from opposite sides of the system.

• Behind the Bar: An After-Hours Roundtable with the Cast

• Mistrials: Bloopers from Season One

• Audio Commentaries with the cast and crew