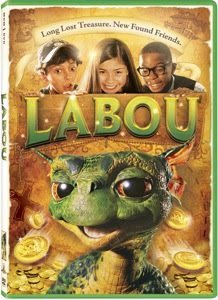 I was introduced to a really cute family movie called “Labou.” I loved the music, the setting, and the story! My kids enjoyed watching it and have already watched it a handful of times. This is a great family movie and has comedy, action, and adventure with a great story line! MGM Home Entertainment released “Labou” on DVD on May 19th, 2009 and viewers everywhere have fallen in love with the cute creature we call Labou.

In a town in Louisiana, legend claims that a famed pirate, Captain LeRouge, haunts the bayou where his treasure-filled ship went down after being struck by a hurricane. Three friends come together to search for the ghost of Captain LeRouge and his treasure. During their search, they make a new friend whose home is in the bayou – Labou. It is up to them to save the bayou from the money hungry oil tycoons. Will they save the bayou? Will the treasure be found? You’ll have to watch “Labou” and find out!

The Labou DVD is presented in widescreen (1.85:1) format with English 5.1 Dolby Surround sound and English subtitles.

• Audio commentary with director and writer Greg Aronowitz, producer Sheri Bryant and actor
Chris Violette
• Building Labou (talks about how they put together the adorable creature we know as Labou)
• The Casting Process (how the producers and staff chose the characters and why and what they brought to the set)
• The Making of Labou: Part One and Part Two (all about the making of “Labou”)
• The Music of Labou (talks about the different bands and singers that brought “Labou” to life)
• Special Effects (talks about the special effects that were used in “Labou” and more)
• New Orleans: Points of Interest (points out some of the areas of interest in New Orleans)