I had the opportunity to watch an awesome movie called “Defiance.” It was an incredible movie and had me on the edge of my seat wondering what would happen next! Filled with action, drama, and real life events, this is definitely a movie to watch! On June 2nd, 2009, Paramount Home Entertainment will release “Defiance” on DVD and Blu-ray. Defiance is directed by Academy Award winner Edward Zwick and stars Daniel Craig (Quantum of Solace), Liev Schreiber (X-Men Origins: Wolverine) and Jamie Bell (Flags of Our Fathers). 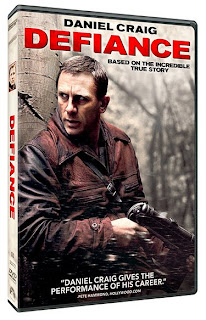 “Defiance” is based on a true story! It’s about brothers, who are simple farmers (and Jewish) and become outnumbered and outgunned by the German Nazi soldiers. These simple men turn a group of war refugees into powerful freedom fighters and build a community they can survive in and rely on. “Defiance” has been described as “gripping” (Larry King), “a must see” (Steve Oldfield, FOX TV), and “complex, engrossing, and worth celebrating” (Richard Corliss, Time). The film received an Oscar and Golden Globe nomination for Best Original Score.

The DEFIANCE DVD and Blu-ray presentations include commentary by director Edward Zwick, an in-depth look at the making of the film called “Defiance: Return to the Forest”, interviews with the real-life descendants of the Bielski family and photographs taken by the director during the production. Additionally, the Blu-ray includes “Scoring Defiance”, a discussion with composer James Newton Howard and violinist Joshua Bell about the much-lauded score.

• Commentary by director Edward Zwick
• Defiance: Return to the Forest (HD)—Explores all aspects of production from the early stages of pre-production to shooting on location in Lithuania. Edward Zwick and his creative team discuss some of the challenges and also the rewards of adapting this well-documented historical event into a feature film.
• Bielski Partisan Survivors (HD)—Photo gallery of images taken by Edward Zwick including behind-the-scenes images and surviving members from the Bielski Otriad.
• Children of the Otriad: The Families Speak (HD)—Descendents of the Bielski family tour the film’s set and relate the story of the real-life partisans along with efforts to preserve the brothers’ legacy.
• Scoring Defiance (HD) —Blu-ray only —Academy Award® nominated composer James Newton Howard and violinist Joshua Bell discuss the incredible film score for Defiance.
• Theatrical trailers (HD)