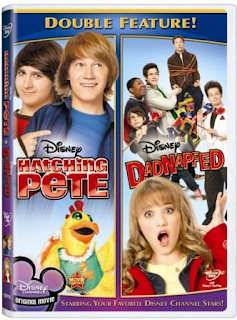 I love to sit down and watch a good family movie with my kids. Disney has a history of good family movies and I found another one (or two actually). I had the opportunity to review Disney’s double feature on DVD – “Hatching Pete” and “Dadnapped.” They were entertaining movies and I’m glad I had the chance to view them. The Double Feature was released on DVD on May 12th, 2009 by Walt Disney Studios Home Entertainment.

In “Hatching Pete,” a quiet high school student finds fame as he becomes “a high-flying poultry impersonator” in “Hatching Pete. Pete (played by Jason Dolley) goes to the same high school as his best friend Poole (played by Mitchel Musso). Poole wants to keep up with the longstanding tradition as the high school mascot, the Chicken, but can’t when he finds out he’s allergic to the costume. His best friend Pete steps in, with the agreement that Pete’s identity will remain anonymous. With this anonymity, Pete gets the freedom he’s always dreamed of and a new personality emerges. He becomes a celebrity amongst his class mates and others! Since Pete identity is hidden, Poole reaps all of the benefits of being a high school celebrity. Is it time for Pete to confess his true identity?

Hatching Pete Bonus Features
• Unmasking The Mascot – A Hatching Pete bonus feature so viewers can find out what it’s really like inside the suit!

“Dadnapped” is about a fourteen year-old girl named Melissa (played by Emily Osment) who is struggling to get her dad’s attention. Her father Neil (played by George Newburn) is a writer and of best selling novels starring a teenage spy named Tripp Zoome. Even though Tripp is a fictional character, Melissa finds she is constantly competing with him for her dad’s attention. Unexpectedly, their planned camping trip is interrupted by a Zoome convention, where fans “dadnap” Neil. Melissa finds the inner teenage spy coming out when she searches for her dad, just to find him and end up being kidnapped and dadnapped again. Together, they use ideas from Neil’s books and solve their own real-life mystery.