Tweet
Home » Lifestyle » Uncategorized » The Winner Takes It All

The Winner Takes It All 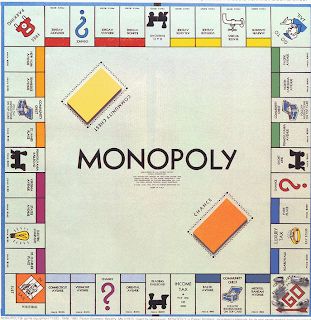 Tonight, George and I played a game of monopoly. The last time we played Monopoly was before Dallen was born and now I remember why. He won by…… A LOT!

We had the “Mamma Mia” soundtrack going while we were playing the game. I enjoyed the music at first…..and then I started to lose – big time lose! The songs “Money, Money, Money” and “The Winner Takes it All” started playing at very emotional points in the game (emotional for me that is). Not good for my ego at all – yuck! George was definitely the “Winner” – “taking it ALL.”

Let’s see – I was in jail 9 times (that I remember). Going to jail at first started out as an annoyance but then became more like a safehaven, because it meant I wasn’t moving around the board and paying huge sums of Monopoly money to George for his properties with multiple houses and hotels. I paid $1150 in rent at one point (for a property with a hotel on it).

I tried to stay afloat as long as I could and had to mortgage my properties – one by one – collecting half of what I paid for them (houses and all). Then I finally lost!

George walked away with almost $3,000 in monopoly money. It got to the point where it was painful to even pass “Go.” My money was either going to income tax or his railroads (he owned all of them, so when I landed on one, I had to pay $200) or fees I’d draw from Chance or Community Chest cards.

It took me back to the days in Wymount when we were playing “Risk” with some friends. The first time I played, I lost and actually cried. Another time I played, I won. George’s friend was killing off his men and was having a great time doing it too! My mission was to kill off George’s men and I just couldn’t do it – ya know, he’s my husband. Eventually, George’s men were all gone. His friend laughed (they were both laughing at this point) and then I said, “I won.” I think everyone was surprised and taken aback when I said that. It was one of those winning moments I’ll never forget (not that I have a lot of them to remember – lol).

5 Responses to “The Winner Takes It All”