Experiencing Vegas from Above on the VooDoo ZipLine 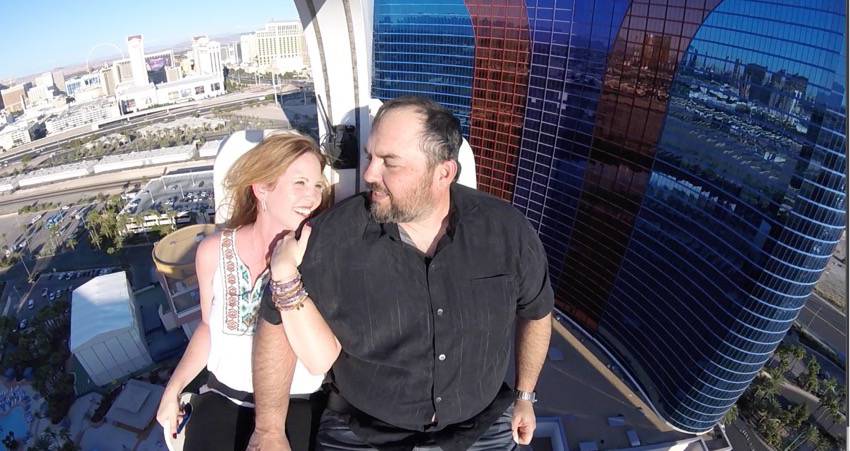 Have you ever soared 500 feet above Vegas on the VooDoo ZipLine? Well, we have! Frank and I love to take road trips to Vegas and we’ve been a lot of times, but our most recent trip included an experience of Vegas unlike any of our other trips…from 500 feet above ground on the VooDoo ZipLine. Now what you need to understand is that I am VERY afraid of heights and this was a really big thing for me to do. I had the goal of doing the VooDoo ZipLine on this trip, followed by the ZipLine on Fremont Street on a different trip, and then eventually doing the SkyJump from the 108th floor on the Stratosphere Hotel on another trip. I honestly don’t know that I’ll jump off the Stratosphere, but I’ll try doing a ZipLine again in the future. 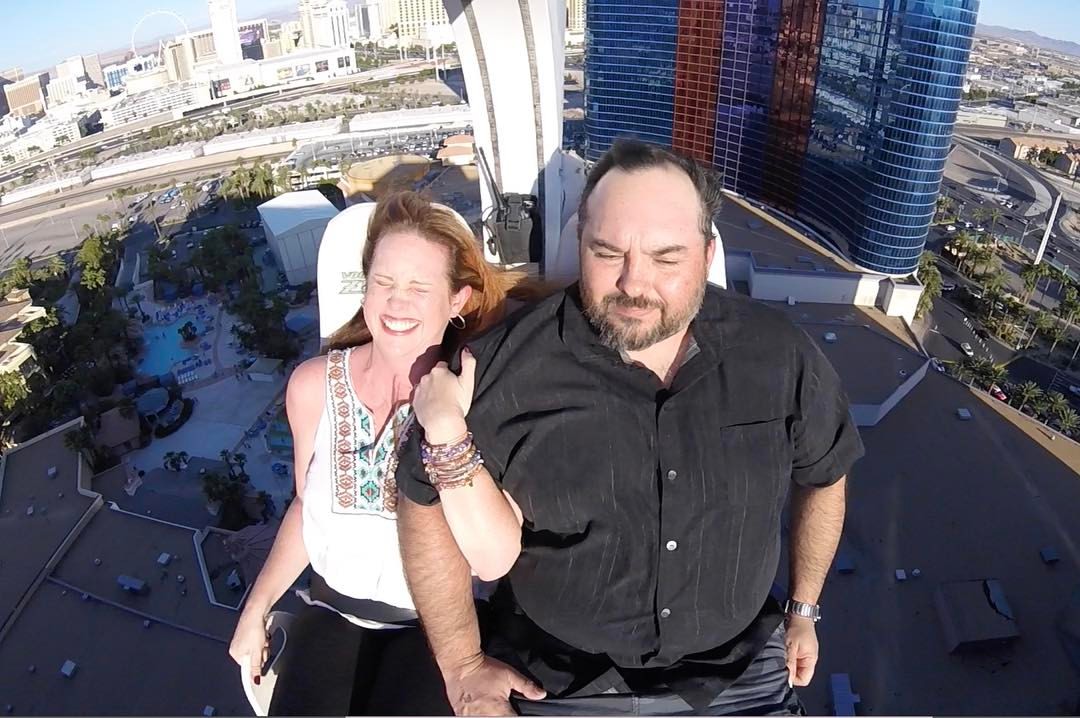 You’re probably wondering what in the hell inspired me to want to jump from that high up? This is a very scary thing for me that I normally wouldn’t even consider doing. Well, I’m going to admit something here. I loved watching The Twins: Happily Ever After? and I was inspired when I saw Haley jump off the top of the Stratosphere (and she was super afraid of heights). This sounds terrible, but I figured if she did it and was super afraid of heights, then I could go on the VooDoo ZipLine. 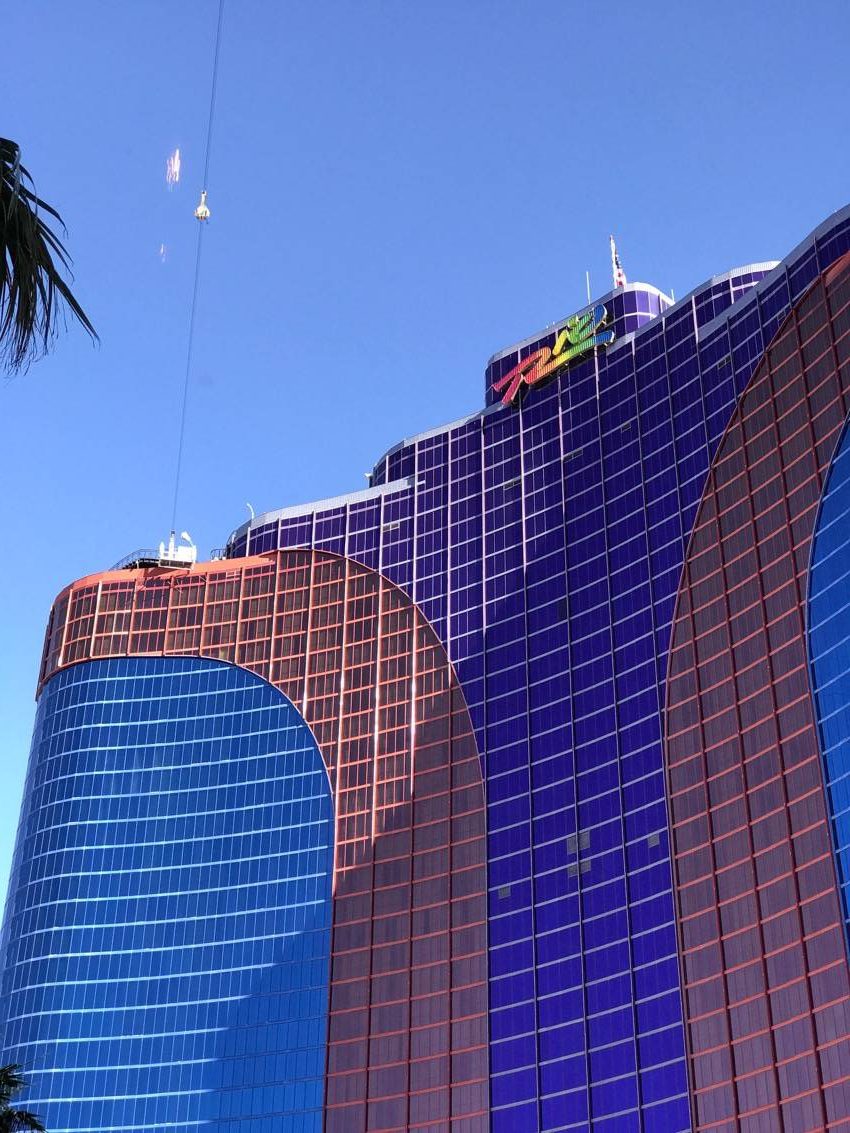 We decided to do the VooDoo ZipLine when we were exploring the Rio Hotel. There was a sign-up booth and we were given a time to head up that gave us ample time to head to dinner. It was cool because when they were ready for us to head up, they texted us. However, it was earlier than we planned and we were still waiting for our main course to arrive. 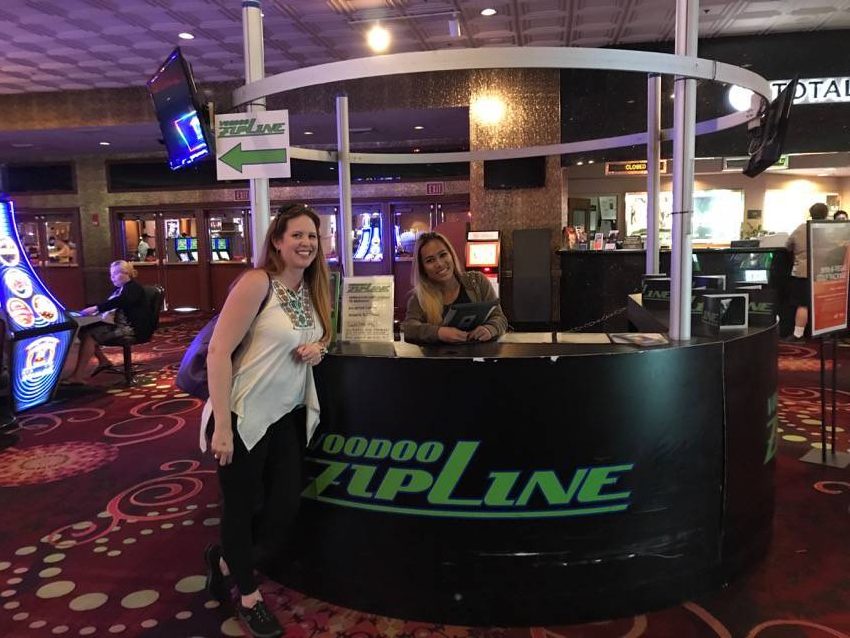 I left the restaurant briefly and headed to the booth where they extended our time to head up. The girl at the booth was super friendly and helpful and the delay was not an issue. When I headed back to the table, our Trashcan Nachos had just arrived and they were so good! If you ever visit Guy Fieri‘s El Burro Borracho, you have to give these a try! I really wish I had some right now and we WILL have these next time we’re in Vegas! The timing to go on the Voodoo ZipLine was perfect as we finished our dinner and paid the bill just as we received a text to head up to the VooDoo ZipLine. 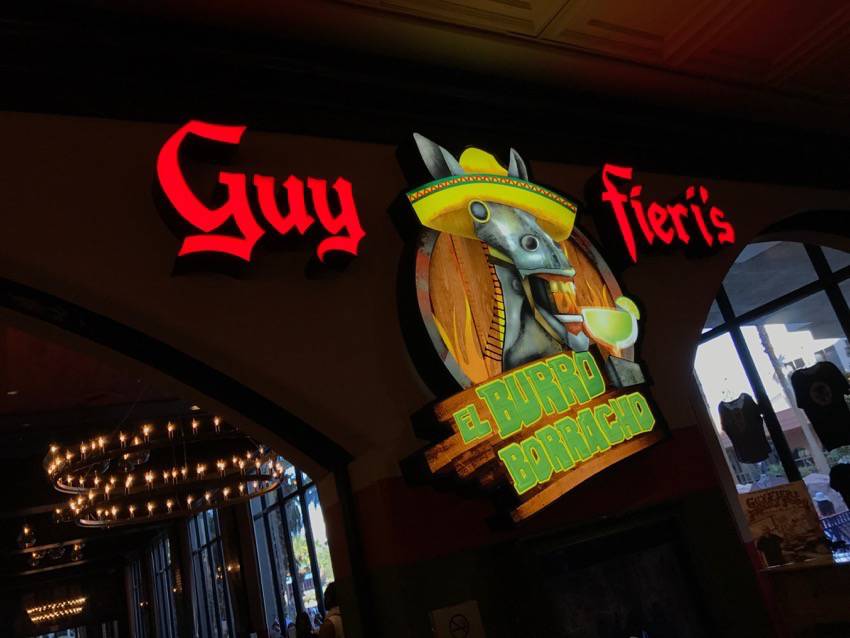 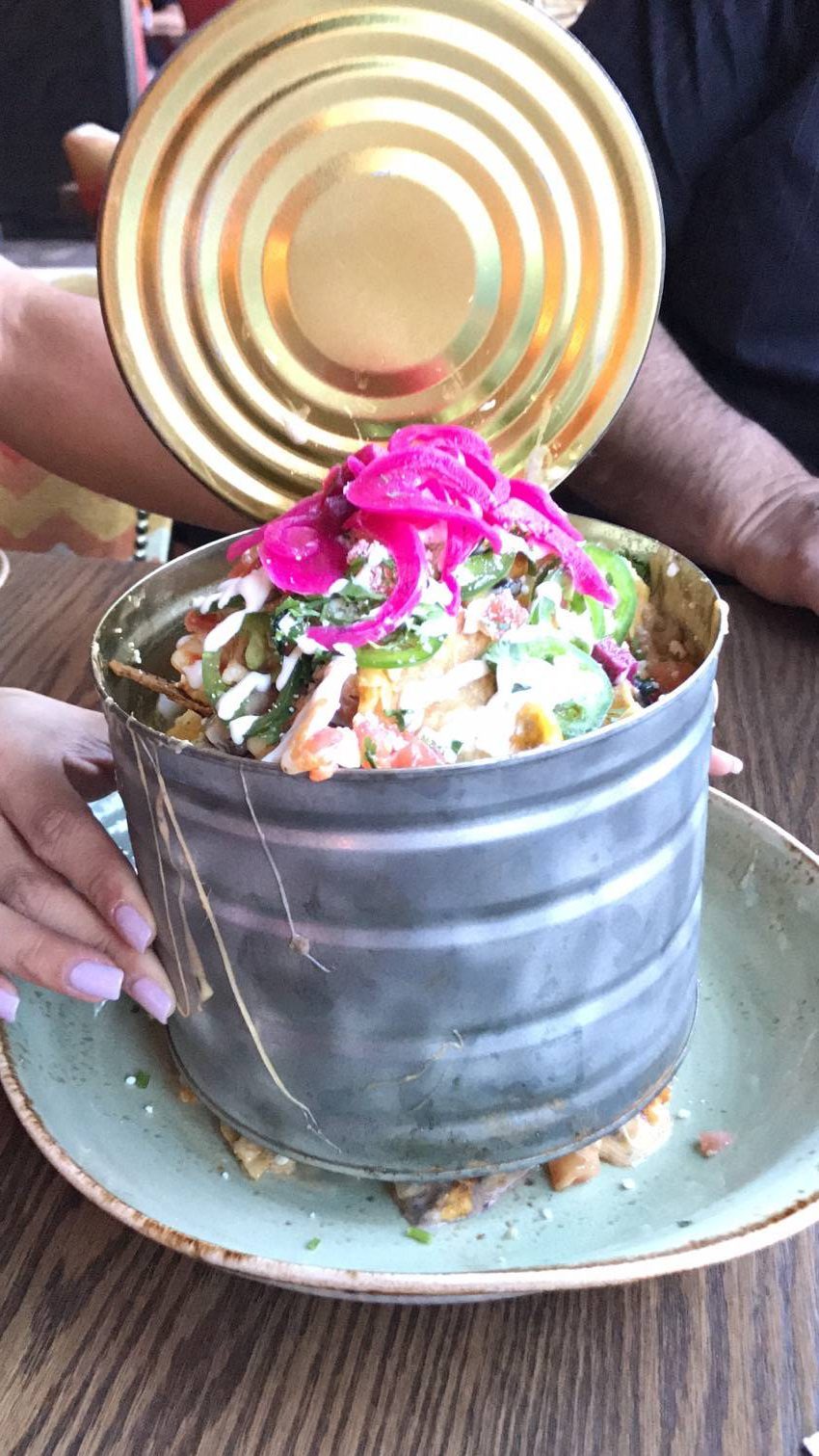 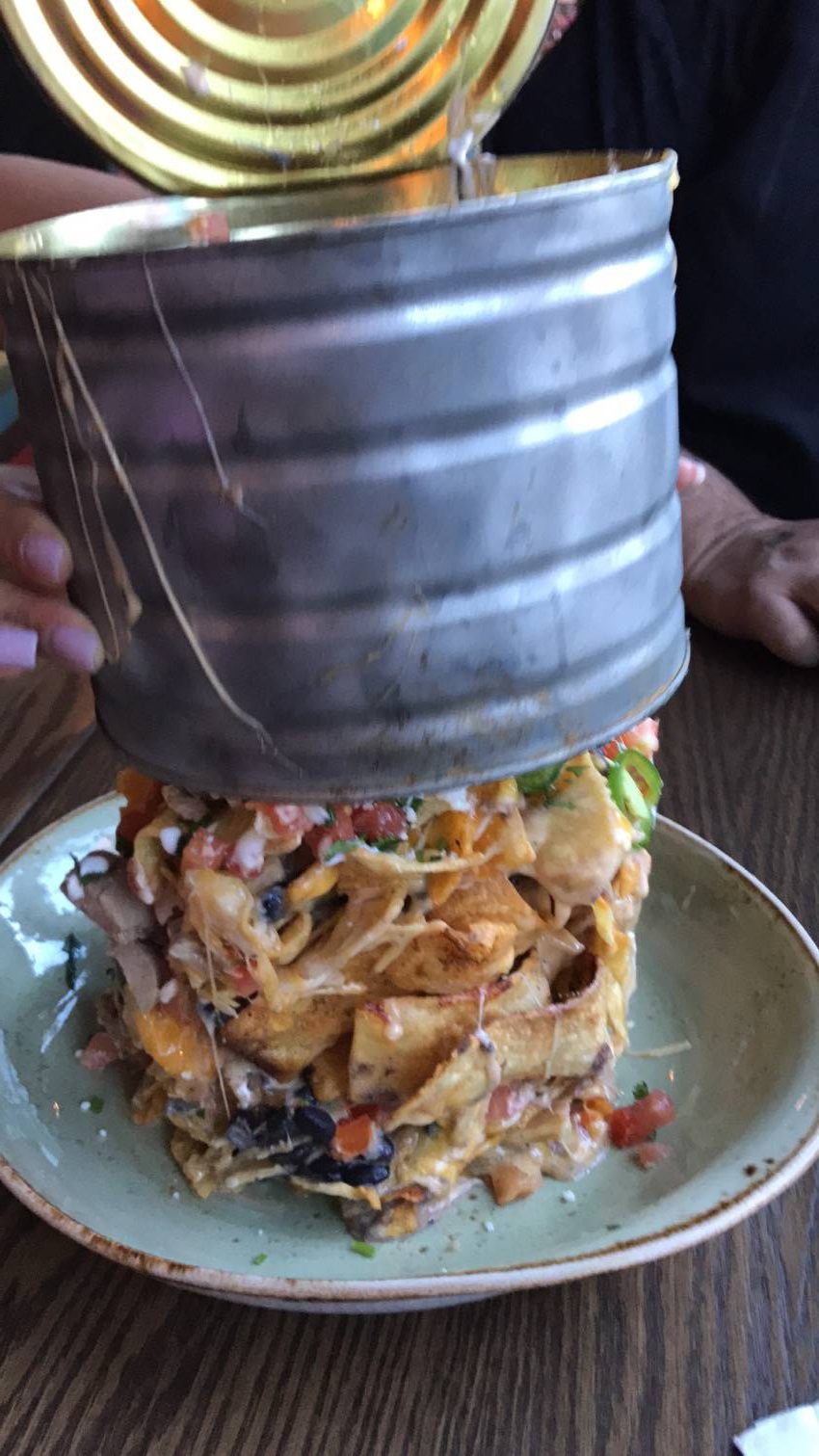 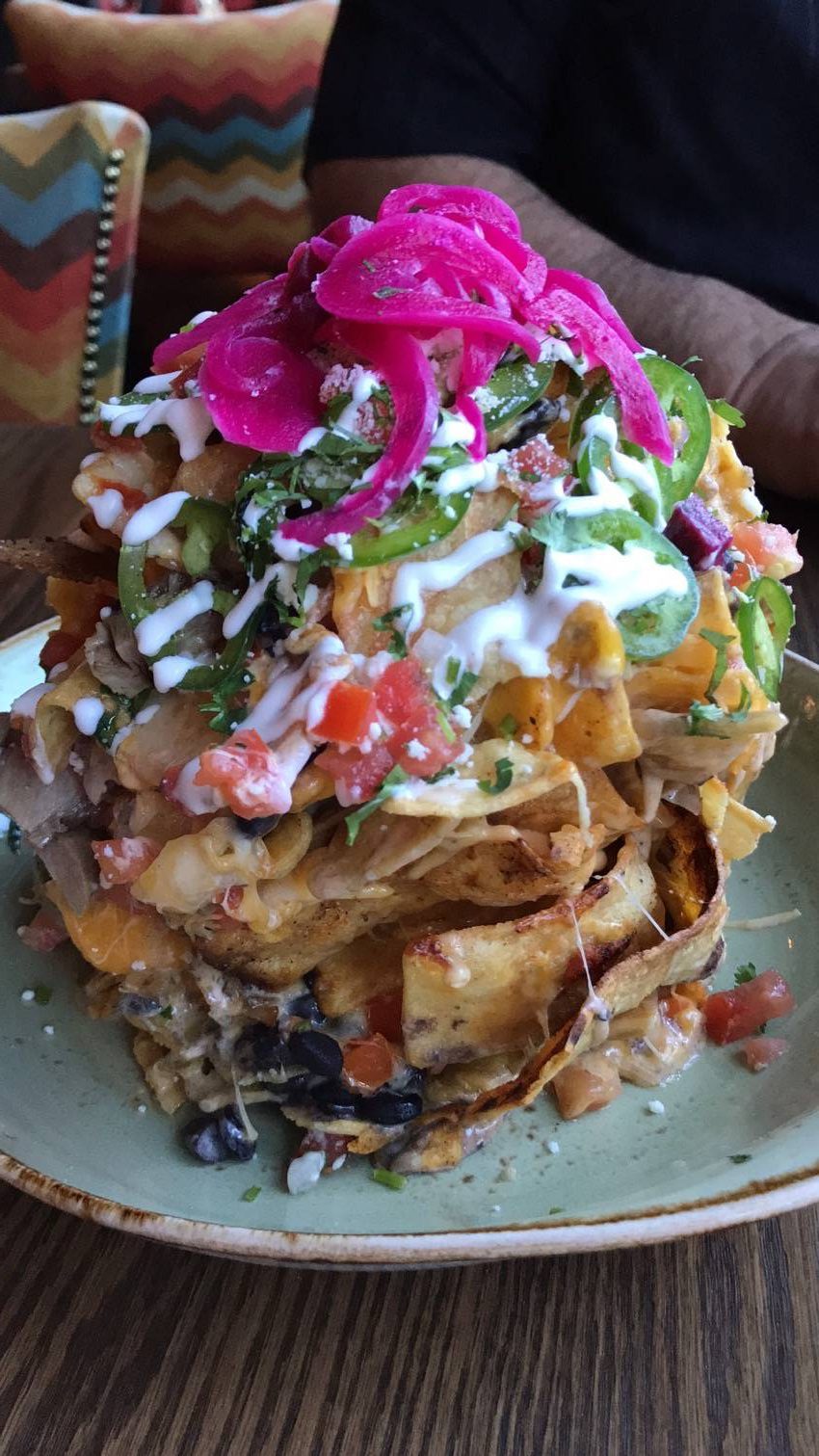 Now that I think about it, I’m really glad I didn’t throw up while I was in the air. That would have been really bad! It wouldn’t have been because the food was bad, but rather because it was right after we ate AND I was super duper nervous to be 500 feet in the air…during the day…where I could see EVERYTHING below me! 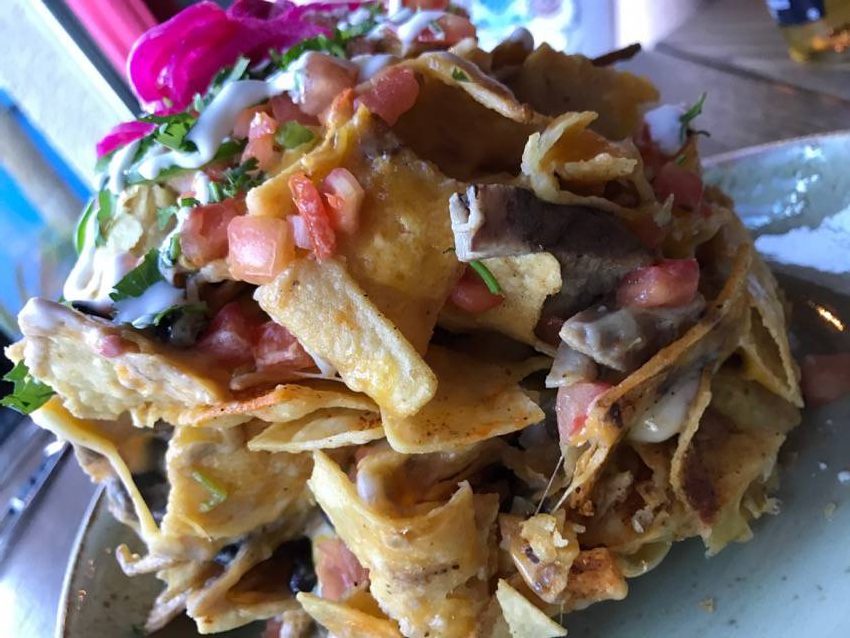 When we were done with dinner, we headed to the escalator and walked above an area where a band would play at other times. Then there was a booth where we gave the lady our tickets and she stamped our hands. We then headed up the elevator to the 50th floor, which was where Rio’s Masquerade Tower, as well as the VooDoo Rooftop Nightclub & Lounge, are located. 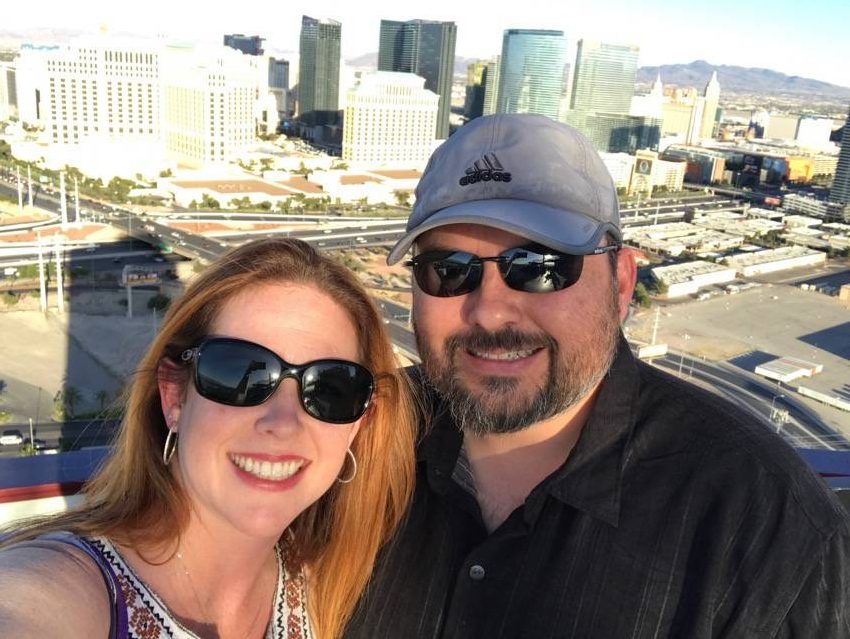 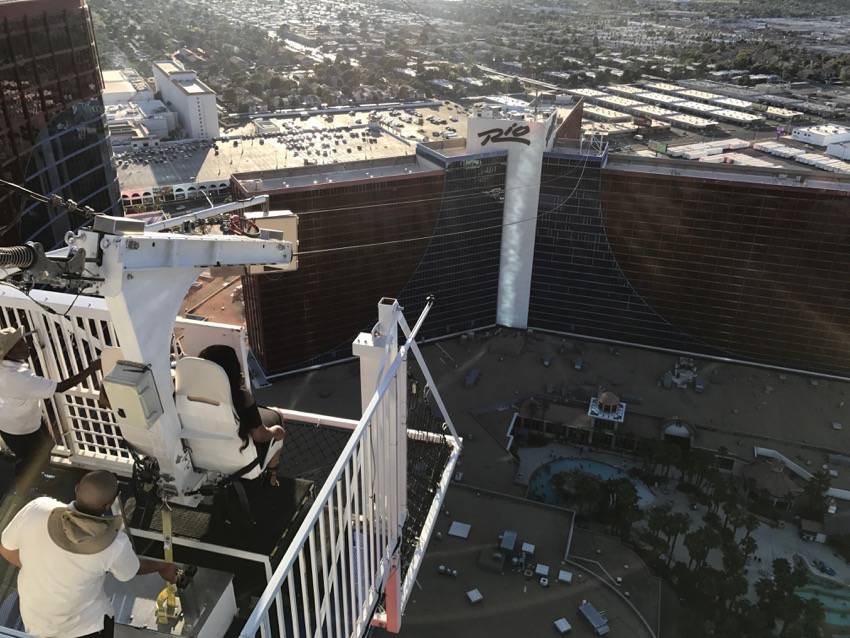 While waiting in line, we opted to purchase a GoPro video of our experience for $32.45 and it was totally worth it! Our tickets to go on the ride cost us $61.58 (including tax) for both of us to ride the VooDoo ZipLine. It was when we were at the top paying for our video that we learned that there was a deal on Groupon for the video, so be sure to check out before heading up to save some moolah!

Once we showed them our stamp and purchased our video, we were directed to wait in line for our turn to go on the VooDoo ZipLine. As we were waiting in line, I was getting more and more nervous…and I think I was making the girl behind us nervous as I was trying to make her feel more comfortable – ha ha oops! 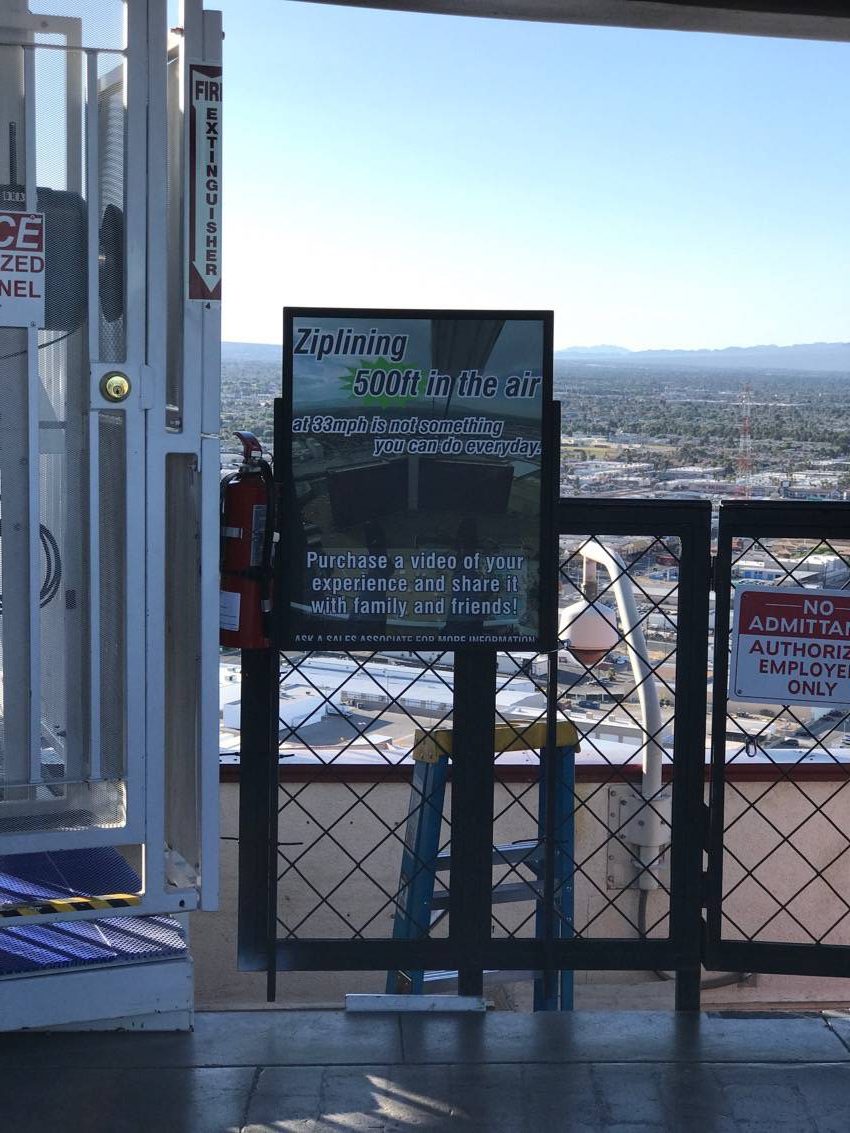 It was finally our turn to get on the ride and they had us take off our hats and sunglasses, as well as put my purse and our phones and any cameras in a locker in which we were given a key. Frank gave them the key as we got on the ride and then when we came back, we got the key back to get our stuff out of the locker. 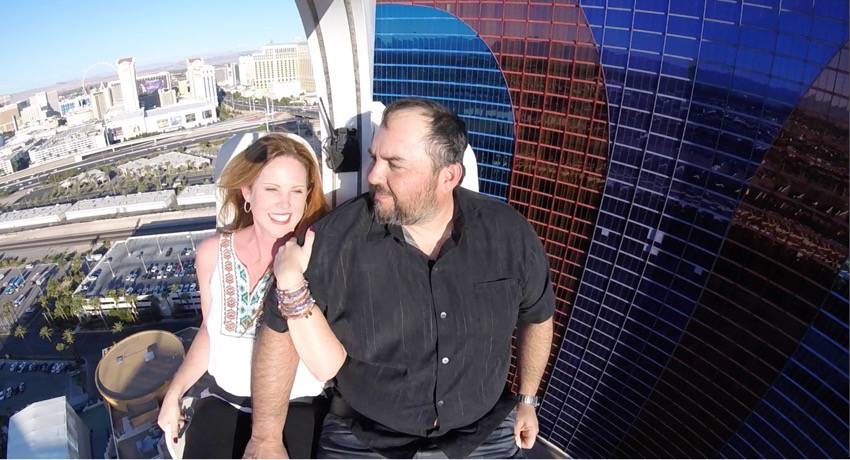 When we sat on the seats, I honestly thought it would be like a ride at Magic Mountain and we would be strapped into a heavy duty harness. NOT…WHAT…HAPPENS. We were strapped in with a seat belt and there was a little tiny handle on the side to hold on. Oh my gosh…now I was really feeling nervous! But I’m here to tell you that we made it back ok and I WOULD do it again! 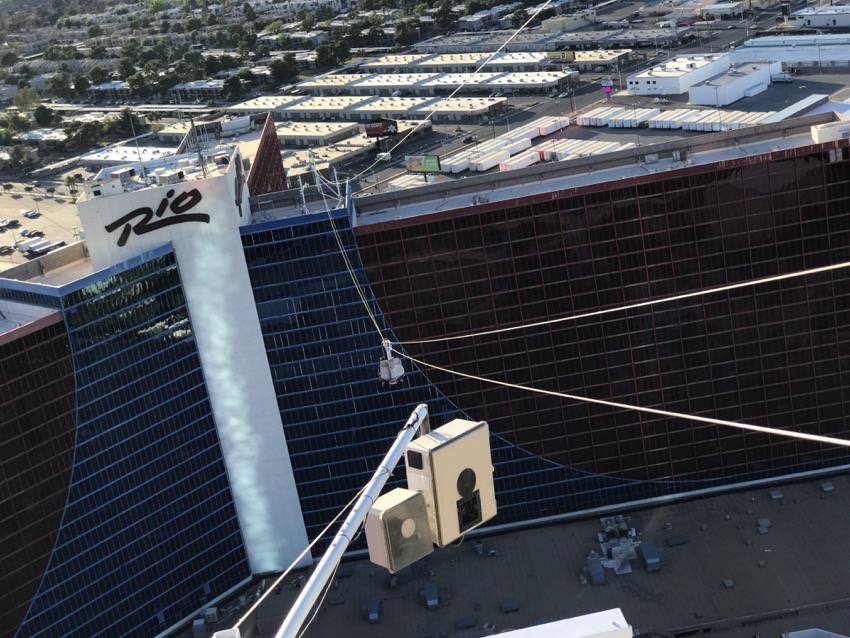 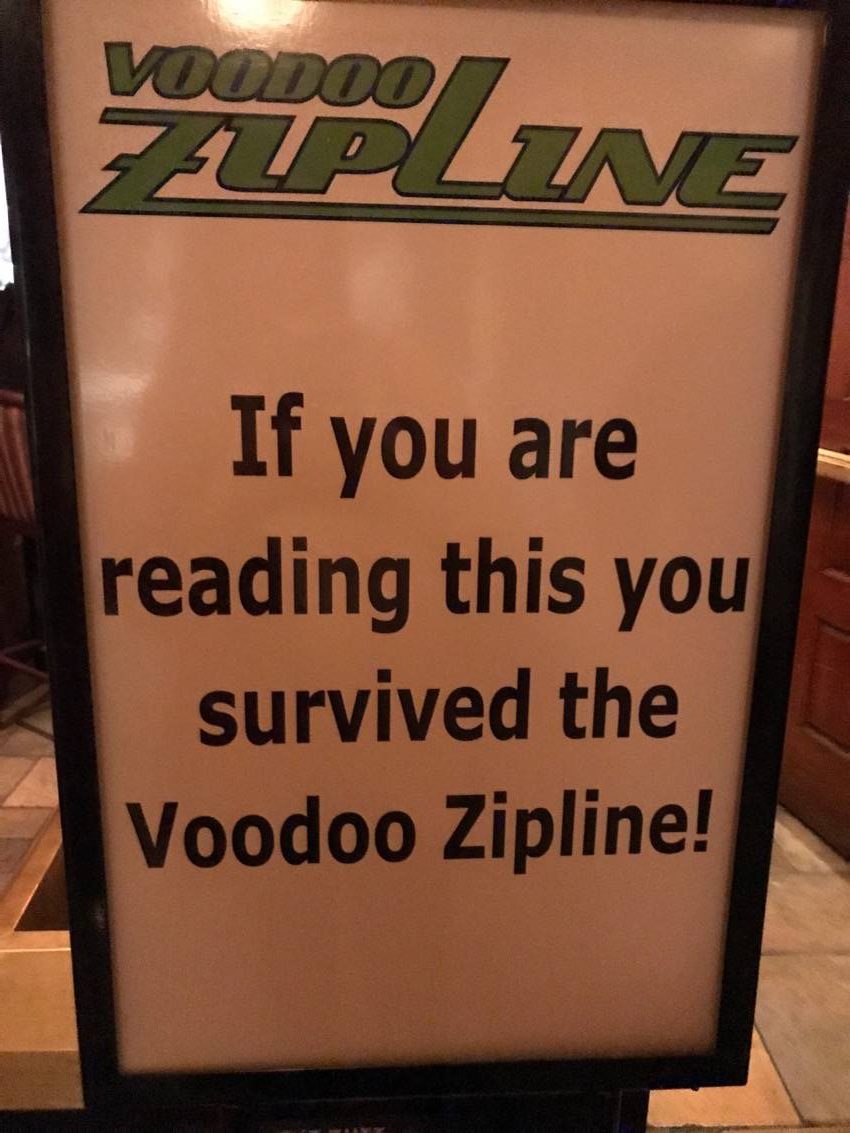 ABOUT THE VOODOO ZIPLINE AT RIO LAS VEGAS

The VooDoo ZipLine sends guests soaring 500 feet in the air at 33 mph, offering a 360-degree open-air view of the Las Vegas Strip. We thought the ride lasted 3 minutes, but it actually lasts a little over 1 minute that you’re actually soaring through the air (although it felt longer when we were in the air – ha ha)!

It was definitely a memorable experience and I would definitely do it again! I think next time, I would want to do it at night to see the difference!

Have you been on the VooDoo ZipLine before? Would you do it?

About Shannon Gurnee Has 2064 Posts

55 Responses to “Experiencing Vegas from Above on the VooDoo ZipLine”